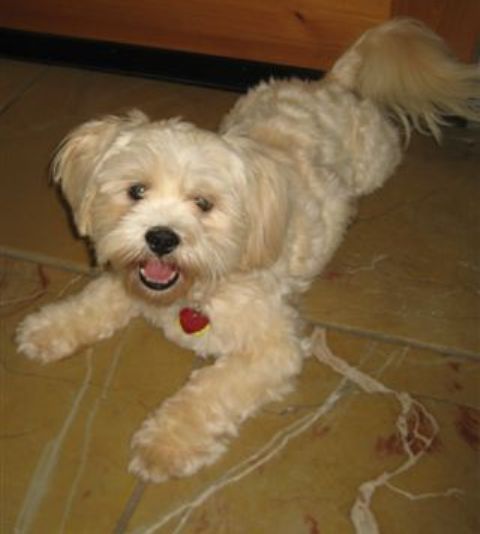 I wrote this post several years ago, I think on the original Awakening Clarity blog.
Betsy’s mother (who is a very young 90) read it,
and put up a new comment about it today,
which brought it back to my attention.
After looking it over I decided it was worth a rerun.
Thanks for the faith, Betty; it has surely made a difference.

These days our spiritual teacher is an eighteen-pound Tibetan Lama named Willy. He is a two year old Lhasa Apso, and he exploded into our lives fourteen months ago to show us close up what a life lived in abiding enlightenment really looked like. He has done precisely that, and taken our hearts in the process. I would say “stolen,” but the truth is that we have given our hearts over to him freely, spontaneously, without his ever asking us to do so. We could not fail to love such a radiant spirit.

Traditionally, Lhasa Apsos were the guardians of Tibetan monasteries. Their job was to alert the monks and huge Mastiffs to the presence of outside intruders. I hear they did a really good job, and delivery men to my house would hasten to agree. From what I have seen, however, in between attempted attacks and burglaries, one would have to assume the fierce guardians spent a lot of time in lama laps and holy kitchens begging scraps from the cook. Everyone needs some time off.

Legend has it that when a resident monk died, his soul went to live in one of the monastery’s Lhasa Apsos. Something like that is clearly the case with Willy, and it would appear, that he has got himself a real lulu of a house-guest, not just a Lama, but a former Dalai Lama or something. You don’t get much clearer than Willy.

Naturally comfortable in the present moment, Willy needs zero adjustment time between changing events, locales, or laps. Whoever is around is a prize, and whatever is happening is absolutely wonderful. He never met anyone he didn’t love, although he does seem adverse to my sister-in-law’s cowboy boots. Maybe they’re someone he knew in his previous life.

What Is works for Willy, no matter what form it’s taking, provided that form is not a possum. Even the clearest of us have our personal challenges, and possums are Willy’s. Nonetheless, his experience of a possum is lived out vertically rather than horizontally. The beast is seen and challenged, there is a flash of teeth and the sound of a bark, but the beast is not actually attacked.

Once either the possum or Willy has been removed from the field of near-battle, Willy is content to let bygones be bygones, and quickly forgets all about it. I confess, however, that I have upon occasion found him sniffing at the trail of a formerly adversarial marsupial as though he was planning to hunt him down. I get it. I’ve been known to exhibit that sort of behavior myself. I’m all for making a big show of bravery once the coast is actually clear.

Willy has got meditation down pat. That dog can sit for hours and never complain about either his knees or his obsessions. He puts me to shame in both departments, but I can still soundly beat him out in the spiritual inquiry department, because Willy has no questions! Everything just is as it is; he wastes no time longing for, or fretting about imaginary alternatives. He knows that in the end there is just This.  THIS This!

In that same way, Willy never asks if he’s enlightened, or if he should be, or if he used to be, or if he will be again. He simply lives fully as whatever it is that he is without looking for either imperfection or lack in himself or the world.  Willy knows that What Is represents the culmination of all that has ever been. There’s no understanding it, so he doesn’t try.

Willy has never once asked, “Why me?” in regard to his having been locked away as a child in a kill shelter, through no fault of his own, and given just seventy-two hours to either raise bail or die. I wasn’t there, but I’m willing to bet that he was living every second to its fullest while he was in the slammer. He wasn’t waiting for anything. And of course someone came to his aid before the clock wore down, finding great joy by bringing great joy.

Willy has never wanted to know why such a cute, sweet, innocent little dog such as he is had such a hard lot early in life. The vet said that he’d been treated kindly, but had come from a disadvantaged home, meaning they had more love than money. I think that’s a fair trade. When he first took over our house he had worms, a bald spot on his back, no hair on his belly due to malnutrition, and was more than a mite skinny. Yet he was as happy and grateful as he could be, because he was not comparing his lot or his life to anyone else’s.

If I had to use just one word to describe Willy, that word could only be Love. That Love’s expression are the Joy and Gratitude that erupt spontaneously and volcanically all day and all night. Even in its sleep that little body stretches and rolls, clearly intoxicated with the luxury of simply being alive, of simply having a body when nothing at all was due him.

Scratch his haunches, and Willy will strain upward to lick you in thanks. Kiss him and he will kiss you back—mind the tongue. Throw a stick and he will chase it joyfully. He’s not very good at bringing it back, but he is a marvelous chaser. Willy plays to his strengths.

So, can animals help to clear us up spiritually? Can they show us how to live in loving clarity on an ongoing basis? Oh yes, you bet they can!  And do. In fact, they will automatically do so if we don’t resist them. Kind of like enlightenment, we have to want truth more than we do our victim story. If we do, then we will surely find it. We can’t not.

Over the past ten years, my two cats Henry and Dickens, have changed my whole outlook on and experience of the world. My guardian angel, Miss Betsy, mother and best friend to all of us, has given us a model of Goodness to admire and emulate. She has shown us Love in action.

And Willy? Oh my. His is one of the Hundred Thousand Names of God.

The Nature of Nature: The iOS App You Gotta Get!

Dear Recently Awakened: A Letter TO the Field