Notes from the Field: Thank You, Times Four 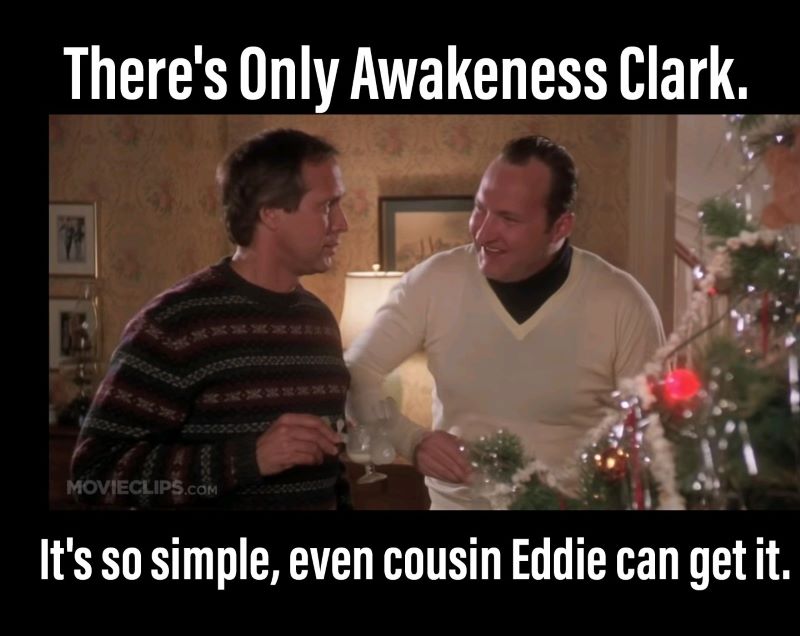 I got this email from an English guy who’d had a big spontaneous awakening.
Then he drove himself – and everyone around him – absolutely crazy.
Next, he and I Zoomed for an hour. It was hilarious.
He wrote to me in response to it.

Thank you for the Clarity Session!
It’s so simple.

Laughable.
There is no path. the starting line is the finish line.
No IQ required.

So THAT’S why I laugh all the time!🙏

This client woke up with me late last week. Her “understanding” is broadening and deepening, as this report shows.

Thanks, Fred. I look forward to more.

I had a wild realization last night as I lay in bed exploring awakeness. I noticed that someone or something had been looking for the locus of control and choice. Suddenly it occurred to me that everything is simply arising. There is no master controller. I had somehow clung to a fantasy that real awakening would mean I would finally be in the wheelhouse. Hah! Without that assumption in place, a lot of how I “measure” awakeness just doesn’t apply. There is no waking up that is going to make me boss of the world. Huh. Or, wheeeeeeeeee!
I told her she had earned an A+. She responded with this:
Ha! Who gets an A+?

I am 41 years old, but new to the ideas of non-duality – stumbling across Alan Watt’s [online lectures] only as recently as a year ago. I found what he had to say fascinating but largely inscrutable on a felt level.

Recently my sister sent me a link to one of your [YouTube] videos. Something resonated and I started listening to them avidly whenever I got the chance. There was a moment, in one of them, when you said, ‘I’m not talking to the unit, I’m talking to YOU.’ It knocked me sideways as I was making my way through a busy London train station.

Today I had the day off work and I listened to Awakening Now [as an audio book] in its entirety. Despite the fact that the day was beset with interruptions including a phone call right in the middle of your brilliant [homecoming] story…I was able to hold onto the threads and pointers across the day. Then, at the end of the day, as I reached the end of the book, I experienced greater clarity than I have ever done before. Wasn’t too long before ‘Nick’ was back in the room but, what was remarkable was that I’ve never looked into ‘thin air’ before and thought ‘that’s me’. Sounds like a very strange thing to thank someone for, but I wanted to take a moment to do just that. Thank you.

I hope one day to take up the opportunity of a personal awakening session with you,

PRIME POST! You and Youness, Fred and Fredness: Much Ado About Nothing “Postcard” from the Field

Letter from the Field, Testimonial

IS HE FOR REAL? Lots and Lots of Letters from the Field on The Living Method of Spiritual Awakening

A Basket of Letters from the Field