On this Day a Beautiful, Gentle Giant Entered the Void 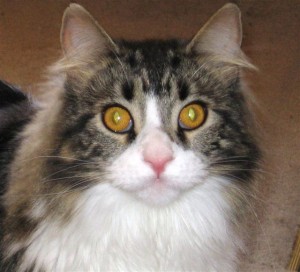 It was a hard day today. Our wonderful old friend and dear companion, Dickens Hackett-Davis, went to the vet for the last time. Kidney failure.

Dickens lived an essentially perfect life for a cat of his temperament. Had he gone where there were children, he would have imploded. Had he gone where demands were made of him, he would have crumbled. Dickens was the only kitten in the litter, and the breeder was not much of a kitten handler, so he never learned how to play with others, and he was terribly hand-shy for years. He was so beautiful. We would reach out to touch him, and he would jump to the floor like we had lobster claws on the ends of our arms.

Which was fine. Everyone here was a bit broken in one way or the other, and that was his brokenness. Betsy and I let him be just as he was, never pushing him, never trying to go too far too fast. I had my online book business, so I was here with him and his brother Henry all day every day. I would hand feed Dickens lunch meat, which helped him learn that I was not a threat.

He recognized that I was a steady food source, and that apparently I didn’t plan to eat him – anytime soon – which went a long way for a Maine Coon cat who would top out near 25 pounds as a full adult. Betsy suggested I start trying to groom him. He didn’t like it at first, but then he grew to love it. Really, the pleasure was so great that he’d go nuts sometimes when I was brushing him. He would grab the brush between his two paws and start rubbing his face against the wire bristles as hard as he could.

Over time, between hand feeding and brushing, He began to trust me. He would let me touch him, then pick him up and carry him. Eventually he became my lap cat. When a cat that size is sitting in your lap, trust me, you don’t do much of anything else. It was a fight to hold a book with one hand and stroke Dickens with the other.The only time he ever sat in Betsy’s lap was last Saturday, when she took him to the vet for the next-to-the-last time. I guess it was a going away present.

Dickens worshipped his brother Henry for the ten years that Henry was with us. At nine pounds, Henry ran the house and bossed his brother mercilessly. But don’t let anyone try to do anything to Dickens! That little cat would attack in defense of his big brother. Neither one of them ever figured out that Dickens was almost three times the size of Henry. Love is blind.

Poor ole Dickens was terrified of the expensive flea medication that I had to squirt on his neck once a month. It would wreck both him and me emotionally for most of a day. Really, it was awful, the worst day of the month.

Some years back I tried another tack. I tried holding his medicine up and showing it to him, so that he wouldn’t be caught by surprise. I talked to him about it, told him what it was, and why I did what I did. Then I could walk over, hold him with my left hand and squirt him with my right. He’d stand there, knowing I was trustworthy, but hating the medicine.

He’d scoot like a rabbit as soon as I relaxed my hand. But it ceased to be traumatic for either one of us, which was wonderful. I’d give him a treat and scratch his head and he’d forget all about it in no time. I always felt badly that I didn’t treat him with such respect to begin with, but no one in my family talked to cats. You grabbed them, did your duty, and they ran off to a closet. So that was the way of it until it wasn’t.

Dickens loved Betsy to death, and she was crazy about him. Yet he and she and the dogs knew that I was Dickens’ mother. He was the only animal I was ever a mother to. I did for him, and he rewarded me with heavy, purring warmth in winter as I sat in the living room reading book after book. He would look into my eyes like I was a god. He did that today, right before he died: stretched his old neck up and gave me the full gazing before he left.

Because of their size, Maine Coons don’t have a long lifespan. The average is 12 years, and Dickens beat it by a little over a year. Thirteen years is a long way back for Fredness. He was here when I was simply trying to learn how to live without being drunk and crazy. And he was here through the awakenings and the advent of Awakening Clarity and the different stages the teaching has gone through.

Dickens saw the full gamut of Fredness close up, and he loved me anyway. Caring for him was part of what helped to gentle me down. I wasn’t always as I am now. I loved that cat with all of my heart and cried like a baby at the vet’s today.

I still love him. Betsy does, too, and little Jack. I’m not so sure about Willy! Dickens was always the most powerful thing in the house. He was never declawed, and had paws and claws like a grizzly bear, but he never hurt any of us, not even little Jack, who as a puppy would make such a nuisance of himself! Dickens was half again as large as Jack, but they became friends, which mostly meant that Dickens would put up with Jack licking him and trying to play.

Betsy and I both knew today was the day. I had silently wondered for the last couple of months if he was going to make it to the new house. I found out that Betsy had had the same thoughts. Well, he didn’t. Forever accomnodating, he died the week before we’re going to move. Poor old thing lived on the wrong side of town for his whole life, but he never knew it. Heaven doesn’t have an address.

Dickens was Love, and Beauty, and Joy all wrapped up like a Christmas present in the softest, most luxurious fur I ever felt in my life. I told Betsy earlier today that he would always be our boy, and that he was never really going anywhere. And that’s true. Our love is unchanged, and where could Oneness go? 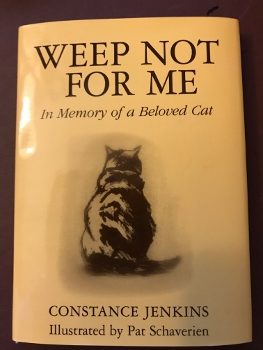