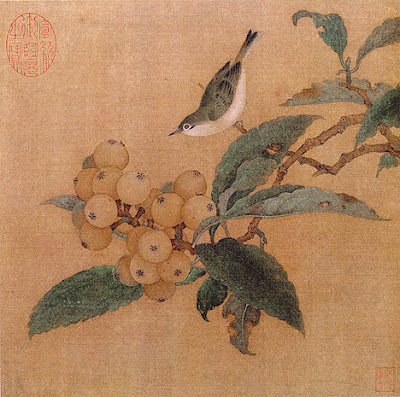 WE HAVE THREE HANGING BASKETS of bright, yellow, Trailing Pansies on our front porch.  It’s a new plant to us, a fine blend between the standard, perky Pansy, and its more delicate, smaller-blossomed, vine-bred cousin, the Viola, which is often called a Johnny Jump-Up.  They are both lovely plants, and this hybrid is a grand new development.  The Carolina Wrens are crazy about all of them, and they keep the plants relatively bug free.  It’s beautiful to witness that sort of symbiosis and know that the entire world is in just this sort of harmonious relationship, although most of it is not nearly so obvious, or so easily acceptable.

I USED TO KEEP MANY MORE FLOWERS in winter.  I had hanging baskets of Pansies and Violas just as we do now, plus I had them in long window-type boxes on the porch, as well as having them share pots with wintering shrubs, and in the ground in patches throughout the yard.  Like everything else in my life, it was overkill.  At that time I wanted it to be very clear to even the most casual passerby that we were not just normal here, we were more than normal, better than normal, hyper-normal, as it were.  Betsy, of course, just liked the color.  I, as always, was trying to prove a point.  My whole life prior to awakening, and for quite some time after that, was essentially a series of loosely linked events bent on proving a point.  Mostly the point I was trying to prove to you was that Fred was okay.  I didn’t believe it myself, but if I could get you to believe it, then perhaps I could then have you dupe me.  It’s pretty weak stuff when I spell it out like that, but I think it’s quite common.  I think, in fact, that such displays are the norm, the very norm I was trying to put across to you, but could not buy for myself about myself.

NOW I DON’T CARE.  I’m no longer convinced that I’m normal, and I no longer wish to be.  I’m freer than that, and the way I stay free is to let you be free as well.  You get to think whatever you want to think, about me, or anything else.  Did you notice that you were already thinking what you wanted prior to my giving you permission?  So all I have really done is relinquish the myth of my control over you and your thinking, and all the world and its worlding, so to speak.  Nothing’s checking with me for permission or direction to begin with.  When I allow myself to be out of control, which I am anyway, then you and the world do what you do, and I don’t suffer.  When I excerpt my magnificent, mental magnetism, straining to keep you all firmly on the right path—as defined by me, of course—then you and the world do exactly what you were going to do to begin with, and I suffer.  Seems like a no-brainer to let go, does it not?  Yet it is far, far, from easy.  I have to first relinquish my position as the center of the universe, which is also a myth, but one of which I’m damn proud. I bet you’re not too different, but of course I can’t know that.  I don’t know much of anything anymore.  It’s lovely.

GIVING UP THAT CENTER is really the entire journey of spirituality.  As I mentioned earlier this week, I was told recently, by someone who should know, that my awakening is not yet complete–oftentimes I still privilege the hypothetical center here.  That came as no surprise to me: I’m the one who told him.  I just didn’t know it indicated a less-than-full awakening.  I guess it does.  I was told, however, that I could press on and drop that privileging altogether, or all but the organism’s conditioned response to primal stimuli, like name and food.  There are people who specialize  in eliminating just that conventional holdout.  He was kind enough to offer a recommendation.

I CONFESS I HAVEN’T GOTTEN THE FULL DOWNLOAD I’ve heard is available; I’ve never made a secret of that.  I also knew and know that a lot of that is often just a matter of time.  No matter how much of an illusion time and space are seen to be absolutely, they remain the king and queen of relative experience, do they not?  They are positively the ultimate pairing of yin and yang.  At any rate, I didn’t even know the no-privileging thing was even possible, but apparently it is, so I pass that long as the second-hand information that it is for me. It’s good advice to pursue tidying up the loose ends; I can see that.  I would absolutely follow it if I cared.  I’ve discovered that I don’t, or not enough to take action.  If what’s left of Fred wants to further unravel, I’m willing.  If it doesn’t, and wishes to hang around, I’m happy with this route as well.  I don’t take what’s left very seriously, so it’s really not a big deal either way.  As I told my mentor, “I feel no sense of lack whatever.  Since the experiencing of this present awakeness feels complete, uneven though it may be, I can’t imagine more, and thus I can’tmiss what you’re talking about.”  The compelling seeker’s fire is long since dead here.  Given that I feel just fine, I’m not traveling to California to see a specialist.  It’s not obstinacy; it’s simply a lack of interest.

OUR TRAILING PANSIES DON’T MISS summertime the way the birches and ferns do.  They have never felt the summer sun; it’s not their season, not their place in the mix.  Their great gift would be lost on summer anyway, because it’s here, amid the gold and auburn landscape, and heavy, overcast skies that they are most useful.  Their place is among the quiet and the dead.  While they might delight living in the full warmth of the summer solstice if it was so fated, they seem fully surrendered to its winter counterpart. I understand.

IF YOU HAVE PANSIES OR VIOLAS at your house, or perhaps even the new Trailing Pansies, take fresh note of them.  On a frigid morning they bow low, much as I do upon finding myself in inclementworlding.  On a warm afternoon they rise and stretch, just as I do when things are going in such a way that this still-privileged body finds itself in agreement with What Is.  These frail-looking flowers can take a deep freeze, or a full snow, and yet be back smiling happily in no time.  I find that I do much the same.  Oddly, however, if you look at these plants’ roots, you’ll find that they do not run deep; indeed, they are found to be quite shallow.  You can uproot them with just a little tug, or even by accident when you’re deadheading them; they do not cling to this earth.  When it’s time to move on, they do so gracefully, without struggle, commentary, or regret. I can only hope to do the same.

THIS YEAR’S WINTER SOLSTICE is coming up in two days; I think I’ll give them extra food and water that day just in the way of thanksgiving.  If one is going to engage in idol worship, you’d be hard pressed to do better than Trailing Pansies.

Housekeeping Notes: Posts will now be written and published spontaneously.  I expect it’ll be regular until it’s not. I remind you that there are technical difficulties between MS Word and Blogger, which I’m no longer going to fight to overcome.  Sometimes the post-by-emails will go out; sometimes they will not.  It’ll pay to check the site for updates.  I am going to reinstate the new and possibly improved “Follow by Email” as an available option. Take a chance, if you like!  As ever, I thank you for your precious attention.  Namaste, Fred