A New Year in the Dream 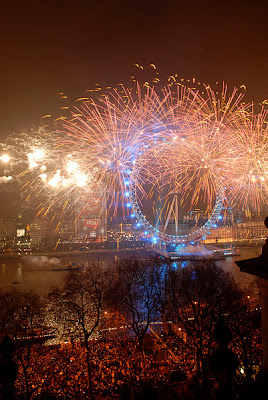 WELCOME TO THE RECENTLY RENOVATED DREAMTIME, which is now designated 2012.  It is of course a wholly imaginary distinction, but this is the great thing about truth: it’s wholly inclusive.  We can have our reality cake and enjoy the dream as well.  The experience here is that sometimes I feel like I have one foot in the relative world, and the other in the absolute.  At other times it’s more like having both feet in one or the other.  Regardless, there is never any lengthy confusion about what is really going on, by which I mean the verbness of Oneness.  I confess to still experiencing a keen sense of Fredness on a regular basis, but even in that situation there is no enduring footprint.  Flash anger, fear, or anxiety can and do arise, but soon enough they are followed by a restabilization of reality, and the deadly seriousness of things is again dropped.  Peace returns to where it never left.

BETSY, MY DREAM WIFE, and I have had a fine first day of Dreamtime 2012.  We’ve been on staycation this weekend, which means we stay in town, sleep a little later than usual, eat a big, lazy breakfast somewhere, do a bit of pleasant, smallish shopping, take our Golden Retriever for a long ride in the Subaru, then come back to too many brownies, Ben and Jerry’s ice cream, and movies watched from bed.  This time around we did a few household chores together as well, which sort of transforms them from being chores into something more like organized, goal-oriented play.  All that really matters is that we are alone together for a long stretch of time.  That is heaven.  That word doesn’t actually even touch it.  What I am putting into print are common, ordinary events.  They are, however, seen from an extraordinary view that we magically share, as if we somehow inhabit the same skull, and she is the right eye, and I am the left.  Of course we do not inhabit a skull or a mind at all; both occur withinthe One that is somehow seen as “us”.  While on one hand we are indeed the apparently split halves of the Taijitu (yin yang), we are simultaneously and emphatically Not-two.

WE HAVE BEEN TOGETHER BETTER THAN TEN YEARS NOW, and have a burgeoning love that has always been built around mutual acceptance and respect.  That recipe cannot fail to sprout adoration, which I assure you is plentiful around this home.  People on the outside see us as blissfullyblossoming.  From our ringside seats here on the inside, it is experienced as wildly exploding. We are like twin quasars shooting from opposite points of the universe, meeting and joining in the amorphous, borderless, no-thing where eternity meets infinity. The teaching has had a tremendous effect on us as individuals, and us a couple.  Forty years ago we both did LSD.  That is all we know to compare this present happening to, though I want to make it clear by doing so we acknowledge we are using a rather profane image to illustrate something sacred.  We become so intimately bound, or merged, or however one could try and fail to describe it, that we know there cannot be any further movement; that surelythis—this day, this conversation, this moment is it.  And it is.  And then somehow it grows anyway.  We sit having tea sometimes and look at each other in wonder: “Can you believe this?” one of us will ask? The other can only shake their head.

LET ME POP IN A COUPLE OF QUICK NOTES on the teaching as it continues to unfold here.  Next week I’ll be in video satsang with Francis Lucille.  He is a very bright light of Advaita, having been a long-time student of Jean Klein, who was the Western master of Advaita in the 20th Century.  I’ve been aware of Francis for a long time, but had somehow managed to not study him.  Not too long ago I broke down and bought a set of DVD’s of a retreat he did in 2008.  It’s called Dialogue Excerpts; is really wise and wonderful, and is available from Stillness Speaks, Non-Duality Press, or Amazon, where I’ve reviewed it.  I am also reading his splendid book, Eternity Now, which I have yet to review, but I plan to rave about it in print soon.  Francis is Rupert Spira’s teacher, another bright light about whom I am equally enthusiastic.  Their message is essentially the same, but it comes through different filters, so it can strike the reader differently as well.  In my opinion, both are examples of awakeness operating at a very high and rare level.

BACK TO DREAMTIME 2012.  I’d wish that all your dreams come true for you this year, but I see that they are already doing so.  We always get what we want most.  As we are divine reflections, how could it be otherwise?

On Positions On Black Holes, Red Giants, and Incense Burners