On karma and rebirth; continuums and DNA; and the one-shot, Wabi-sabi personality. (Part II) 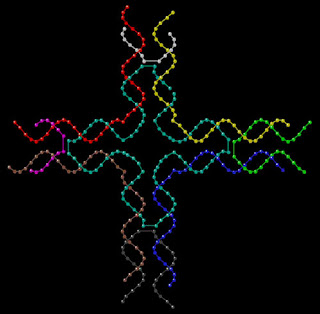 SO, WE HAVE COVERED REBIRTH, which is happening in every moment, not at some time in the future.  We have taken a close look at the one-shot, Wabi-sabi body, which is here today, and gone forever at death. So where do karma, continuums, and DNA fit in?  Logic would tell us that if the personality is a one-shot deal, and rebirth is not about the personality re-becoming, then This Is It.  And that’s the truth; indeed it is.  But it’s not the whole truth.  We are back to paradox.

WHILE THERE IS NO SECOND CHANCE at life for this personality, there in nonetheless acontinuum sitting in a chair within relative time, which is 10:00 EST, on November 9, 2011 (whatever THAT means) and in a relative location, called Columbia, South Carolina, USA, Planet Earth (whatever THAT means).  From whence did this continuum arise? And what is it?  I mean, why this body and not another?  This body has a lineage. We call it DNA.  My ancestors were quick to respond to danger and better than average at finding food, or I wouldn’t be here.  My entire lineage, going back thousands and thousands of years, is chemically linked; bonded through time into right now, as if my ancestors were still alive and living in my house.  In a sense, they are, for surely I am them, and they are me.  Neither of us exists without the other.

AND WHAT DO WE SENSE right away when we hear this kind of statement?  Duality.  This talk, so to speak, is all about the inner workings of the dream.  We’re entertaining ourselves.  We seem to be getting some vital information that might spur us on toward enlightenment.  The former is true, but the latter is not; not directly, at least.  None of this has anything to do with the truth.  The value in it, assuming there is some, is that it does provide context, or background for truth.  Those who make light of spiritual context don’t have much of it, I promise you that. A flower will bloom quicker with sun and water than it will under conditions of parched earth and darkness.  Very often we learn about Nonduality through using duality as the blackboard.  Actually there’s no other way to do it.  But in this vein I mean we are consciously using examples, as in a classic teaching scenario.

BACK TO DNA.  Yes, on an absolute level there is just One.  Check.  But on a relative level, which weappear to live in and undeniably experience, there are degrees of relationship.  I am more kin to my parents than I am to yours.  Who’s going to stand up and argue with that?  We put people into some prisons and let them out of others based solely on the mathematical truth of that statement.  Within the dream, DNA is as firm a statement of relationship as you get.  What I am saying here is that although the personality does not “return” (as if there was some other place for it go), the DNA does.  I don’t know my science very well, and I’m not very tuned into either theology or myth, but I am very in tune with What Is, and somehow, DNA, which appears to disappear upon the death of the host, links itself like the rise and fall of an inchworm, into the dream world future through host after host after host.

I’M CLEAR ON HOW TO MAKE A BABY.  This is quite beyond that.  This is a biological mechanism,not unlike a mechanism of physics; say for instance, gravity.  This mechanism uses bodies to accomplish its umbrella task, which is to keep the dream machine rolling and populated.  It is no more personal than a doughnut machine.  And we have about as much choice in what color and kind and flavor of doughnut we’re going to become as a thrown rock does of defying gravity.  Whatever goes into the box is whatever went into the dough.  We can call that freshly arrived doughnut conditioning.  It has been conditioned and reconditioned since prehistory.  And what’s the chief conditioner?  Our hero, karma.

WHAT REALLY ARRIVES HERE on Planet Earth, University Hospital, Maternity Ward 9,  Anywhere, USA, is a wrinkled, pink, probably squalling lump of conditioning.  Is it Mr. & Mrs. Jones’ infant?  Hardly.  Mr. & Mrs. Jones are doughnuts, too.  The only thing in that chain that is real is the hole in the middle–the space.  The body is the new common carrier of its lineage.  It is the newest form taken by the karmic conditioning that is expressed through the vast math and untold science of DNA.

HERE I WILL SHARE A FANTASY OF MINE.  Please note that I am not passing this on as truth or even metaphor.  This is just a nonsensical story, something that has played across my mind’s screen for a long time. I’ve never had the opportunity to express it before, so sadly enough, you are the luckless victim who it’s going to be shared with whom it’s going to be shared.  Think of near-death experiences, NDEs.  I’ve never had one, so I have no hard opinion on them one way or the other.  In the end I simply don’t care much about them, because whatever they are, they are dream world manifestations, and thus of marginal interest to me.  I know they transform lives and all of that, which is wonderful, but where are the transformed lives taking place?  The dream.  So I’m just sharing this for fun.  Think about the shared elements of many NDE reports: we’ve all heard them.  A tunnel, a light, magnetic pull, and a sense of joy and freedom.  Does that about say it?  I mean, that’s the classicthing, you know.

IN LIGHT OF THAT, I ASK YOU, how does an infant arrive on our planet?  Is it not via a tunnel?  You say cesarean sections.  That’s delivery.  As I said, I am clear on how to make a baby, and if it doesn’t involve a tunnel, I’ll eat my keyboard.  Is there not light upon release from the cave, however it comes?  Is there not some “gravitational” pull of birth, of breath, of struggling to come to life?  Would there not be a sense of ecstatic freedom to pass from a space where you are bent low from a lifetime of layered conditioning into a fresh new space where at least to begin with there is no layered conditioning?  What was layered conditioning is built in now, and so for the moment at least, it’s much lighter, because we aren’t aware of it.  It’ll show up, you can bet the ranch on that, but not for the first couple of years.  For those years there is bliss.  We know bliss, each and every one of us.  We know freedom.  We know peace.  It’s all part of the early arrival package.  It’s so powerful that it has an addictive quality to it.  And so we spend the rest of our lives trying to get it back.  Enter seeking.

BUT AGAIN, IT’S JUST A STORY. I don’t pass it off as anything more than a personal fairy tale that fell into my mind sometime ago.  My sense, however, is that as chock full of holes and utter bullshit as that scenario is, that there may nonetheless be some grain of truth to it–somewhere–even metaphorically.  Or not.  I don’t know.  It tied in with the topic, so I present it for you to turn over in your mind as I have already done many times.  It is also the long way around the block to say, that however it happens, the channel that spirituality’s fabled Witness is watching is changed upon the death of the old personality and flickers on again with the birth of the new.  That is what Nisargadatta said about suicide, should one go that route, rather than to ride out the indignities of a crushing terminal illness.  He didn’t opt for it himself, but he didn’t see anything particularly wrong with it.  I can’t quote him directly, but he said something to the effect of, “Nothing really happens.  There’s just a change of channel.”  A one-shot, Wabi-sabi personality has mixed again into the emptiness that formed it.  A new, one-shot, Wabi-sabi personality has come out of that same emptiness.

SO, TO WRAP THIS UP, we could say that a sentient body is part of a mechanism to allow the hosting of a string of DNA, in the same way that the purpose of a cup is to host hot tea.  Arriving on the scene slightly altered by its last life adventure, it is the product of karma and the representative of the DNA/karmic continuum.  It starts life naked and anew, but the layered conditioning begins immediately.  With each bit (or byte!) of conditioning, a rebirth is fostered.  It may be conscious, it may be unconscious, but change is being registered, and rebirth happens.  We never enter the same river twice, and the being that enters the river is never the same either. Namaste.

On karma and rebirth; continuums and DNA; and the one-shot, Wabi-sabi personality. (Part I) Warning: Smoking spirituality may be hazardous to your enlightenment.