LETTERS FROM THE FIELD: A Note from Dr. Jenny Wade 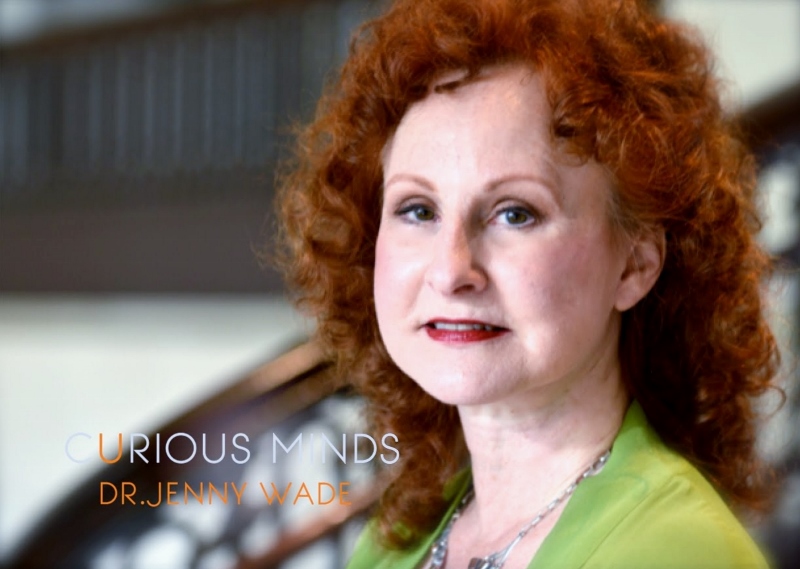 Dr. Jenny Wade is a consciousness researcher in the Bay Area of California.
Besides stealing my heart, she counts among her friends Deepak Chopra, Ken Wilber,
Michael Murphy, and a host of other leading teachers in the nondual field.

Here’s a YouTube clip of a TV show featuring Jenny and Dr. Chopra, and an audio clip of a
conversation between Jenny and Ken Wilber. She’ll be a keynote speaker at one of
Michael Murphy’s events at Esalen Institute in Big Sur.

Jenny is the author of two books, Changes of Mind: A Holonomic Theory of the
Evolution of Consciousness, and Transcendent Sex: When Lovemaking Opens the Veil.

Dr. Wade was a featured guest on The Consciousness Chronicles, a series of DVDs
which I reviewed and posted about several years ago on the original Awakening Clarity,
long before I knew Jenny. (I moved that post to this site in January of 2015.)
Here’s a YouTube clip of Jenny’s interview.

After a serious illness that caused her to re-identify with the character-unit,
Jenny came to a re-awakening via one of my YouTube videos a little over a year ago.
You can find her original testimonial on the Sessions page of this website.

I’ve had it in mind to write to you for some time and seeing [the YouTube video] “Living the Dream through Nondual Eyes” put me over the edge into doing it.  You can feel free to use any of this email for your own promotional purposes, but since it’s a little personal I wanted to send it to you this way rather than posting on the video comments section.

From my own biased viewpoint, I’ve been wanting to express to you my amazement and appreciation for how your teachings have matured (or seemed so to me in the past few months).  Without further qualification about my limitations, I’ll just say that in ways that are hard for me even to describe in behavioral terms your teachings seem to be going deeper, to be clearer, and to be dealing with subtler yet very real things on the path.  And “Living the Dream through Nondual Eyes” is one of the clearest teachings about what happens after awakening.

Although this teaching may have been addressed before by others, Adyashanti’s End of Your World, which you mention, and [Jack Kornfield’s] After Enlightenment, the Laundry, as more people wake up—thanks to you!—it is coming more to the forefront, whereas it was previously more like the problems of so few that it seemed frivolous (“Should we make the bathtubs on the yacht from malachite or lapis lazuli this time?”—how many can imagine having such a problem?).

Since you’re waking up more people than anybody I know of, you’re at the population center of post-awakeners who really need guidance with integration and the stages of post-awakening.  I love your “desert of awakening” metaphor, and as a developmentalist, I see a lot of value to helping people steer through these new dilemmas and providing them with a roadmap, from stabilizing awakening through the usual, if not inevitable, woods that follow.

Spiritual communities may have done this before for people, especially if they were monastics where many life choices just weren’t an issue, but with growing numbers of secular people awakening—or living in the world even if they are regular Buddhist sangha and retreat adherents—orientation to the real challenges of romantic relationships, family, and earning a livelihood is essential.  I encourage you to dedicate some of your formidable energies to this task—maybe your next book?—because you seem to me to be uniquely qualified to help others find their way and make sense of their experience.

In any case, I want to praise your continued teachings and to acknowledge their increasing depth and Fredness (what a charming character).

Eternally grateful for you,