Pick a World and Live In It, Part VI, Conclusion 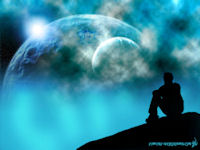 Second, I want to announce that beginning tomorrow we will open both a new series, and a new typeof series.   We will do it until we don’t, and it will be called The Nondual Diary.  I hope and think it will be worth our while, whether you’re a long-time veteran or something of a newcomer.  I do not expect it to be as “technical” as this series ended up being.  I certainly hope it is not.  It’s my wish that the direction become simpler and shorter.  Starting tomorrow we’ll see what actually comes to pass.

And lastly, today’s installment will conclude our Pick a World series. Thank goodness! I do think it’s an important topic, because to go back to my opening statements, which stated that in my experience, mixing up the apparent two worlds of the relative and the Absolute it is the single most common, confusing, and ultimately penalizing aspect  of the apparent paradox of Nonduality.  But I now understand why it is so rarely addressed head-on.  It’s very, very messy.  Perhaps it’ll be a little lessmessy for those of you who have stuck this thing out.

I don’t know whether or not I’ve successful been a successful transmitter of pratipAdya-pratipAdaka sambandha (essentially the transmission of special knowledge through words alone), but I know that I am worn out from the attempt.  Let us finish it.

Much of what I have said in this article is what all the mystics of all time have also said.  There is little if anything left to say in Nonduality from the standpoint of genuine originality; I can and do hope there is some originality in this current presentation of ancient discoveries.  The mystics tell us is that “we” and “me” are misnomers.  There is only an “I”, a singular, Absolutely absent, relatively present No-thing expressing itself as What Is; that which is showing up right now.

It shows up as a multitude of image-appearances within an illusory world of cause and effect, time and space, life and death; beginning, middle, and end, with all sorts of karmic repercussions, lifetimes, the whole nine yards.  What is totally obvious, yet nearly always overlooked is that the exact samepersonal-feeling-conscious “I” who is reading this sentence is always and already that very same undivided cosmic I Am which presents Itself as both Dream and Dreamer.  As Ramesh Balsekar said, “The seeker is the sought.” Whether we are speaking of the unmanifested, or the manifested aspect of this No-thing, those aspects forever remain distinct, but inseparable.

In short, no matter what it may feel like to so-called individuals such as the typist and the reader, there is in fact just One and this One is an ever-present “verbness” that is currently both Being and being experienced by Itself via the illusion of “other”.

Sometimes the pointers have been clear through the ages and sometimes they have been veiled, but if they are coming from truth, as many, many are, then regardless of the culture or the time period, they will always point toward this same conclusion.   Local conditioning tends to color the presentation of the truth, but not the transmission of the core truth itself.   Whether seen in South America or New South Wales, whether it was first thing this morning or five thousand years ago, the truth is the truth and that is that.

Manifestation, in association with the myths of an individual me complete with free will and destiny, in combination with its story of birth, drama and death, is referred to here to as the Dream, or the relative world.   The Unmanifested, within which that Dream appears on and in is referred to here as Reality, or the Absolute world.  The two are in fact one, but they don’t seem like one.  Again I will borrow from Ramesh, who coined a phrase (or at least I got it from Ramesh) to describe this paradox. What we are in fact is Unity.  What we experience is diversity.  So Ramesh labeled it Unicity.  I cannot improve on that word.

We are at long last there.  I have written thousands of words to establish enough intellectual trust, so to speak, and to insure enough intuitive understanding to offer the following statement:

What works within the context of the Dream, within the apparent world of diversity, works onlywithin that theoretical framework.  Insofar as practical mechanics go, the Dream has nothing whatsoever to do with Reality and vice-versa.  The Dream is generally logical, sequential, and caused.  To enter Reality we have to intuitively embrace paradox, thereby leaving logic, sequence and cause at the door.

There can be no cross-pollination, so to speak.  The problems that arise from attempted “cross-pollination” typically stem from our attempt to manipulate or justify personal outcomes within the Dream.  We do so via some logical viewpoint achieved either through intellectual study and projection of some supposed Nondual logic.  This can even come about from referencing supposed Nondual truth acquired previously via true seeing, but which is now being referenced through the debilitating hazard of memory.

Both the typical entranceway and the trapdoor of Nonduality hinge on the fact that there is indeed a sort of apparent logic to it.  The basic tenets can, in fact, be held by the mind and be understood.  But the mind can never hold more than a few loose threads of such a panoramic tapestry.  It can’t possibly hold Truth Itself, but only a story about the Truth Itself.  The human brain can only behold Reality; it cannot contain it.

Attempts to manipulate personal outcomes within the Dream are by their very nature always going to be positional and self-serving, which is diametrically opposed to the concept of Wholeness from which the strategies spring.  Nor can a personal philosophy be pulled from Wholeness and wired into the Dream.

Examples will serve us better than discussion.

It is seen from the Absolute view that everything is just fine exactly as it is.  All is well.  This view, however, does not migrate from that seeing into us being a socially unconscious, inactive, unhelpful slug in the Dream, simply because that Absolute position is currently being wrongly recalled by an entirely relative, socially unconscious, inactive, unhelpful slug.  That would, in fact, amount to a karma-inducing, Dream-state decision although from the Absolute view the notion of decision is seen as fallacious.  From the Absolute view, which is itself something of a misnomer, everything is seen to be happening utterly spontaneously.

The decision to “not practice” in order to “achieve” enlightenment is in fact a practice.  The goal of “meditating oneself into enlightenment” is seen as ridiculous, but so is not meditating in order that the goal might be secretly achieved through some devious, sleight-of-hand surrender game.  These positions are at heart erroneous and simply do not transfer.

The notion that I am going to “let loose the reins of my life and let Life run itself” is not going to work if you’re crossing a busy street, unless your secret objective is to wind up on a hospital or the graveyard. Go re-read the Bhagavad Gita: effort counts. That’s how the game is played and there is no way to short cut it without also short-circuiting it.  The observed practical mechanics seen from one so-called state are simply inapplicable to its apparent opposite.

Let me illustrate all of this with a helpful story that I’m stealing from Dennis Waite, who borrowed it from someone else.

Many years ago there was a meeting of holy men in India, representatives of the Cat School and the Monkey School.  The Cat School mystics said that enlightenment was a matter of grace, because all one had to do was “go limp” like a kitten, and God would pick you up in his mouth like a mother cat and deliver you into your goal.  Without that grace, one would go on dreaming forever.  The Monkey school mystics said that enlightenment was due to hard work, because just like a baby monkey, you had to hang onto your mother as tightly as possible if you wanted to be safely carried home.  Hard work was the way home.

I don’t know what conclusion the old mystics came to, but I can tell you the conclusion I have reached.  Like everything else of significance that I have discovered in spirituality, it is not an either-or answer.  It’s both-and.  We have to have grace in order to wake up.  Hard work seems to be a an easier target for grace than laziness. Either way, once we have been struck by grace, we then we have to work continually to remain in the condition it put us in.

The notion of a true “lazy man’s way to present enlightenment” is absurd.  There may be no one here and no one to do it, but without consistently stripping down our beliefs and opinions anyway, sleepy-time is right around the corner.

One again, there is simply no short cut.  Ramana Maharshi always advised his followers who already had an established practice to continue it.  He knew that if they pretended to be in a place where they no longer needed training wheels it was just a matter of time before they crashed their bikes onto the driveway.  We need what we need until we don’t.  “Don’t” just happens; we are not the arbiter of it.

While I’ve never met him personally, I nonetheless have little doubt that the Dalai Lama is consciously awake.  So he has to know that all is already hunky-dory.  I notice that he has worked tirelessly for his people anyway.  Mother Teresa was either consciously awake or certifiably insane; take your pick.  I choose to think she was awake.  I notice that even though she had to know that everything was fine, she spent all of her time and energy and attention in the steady relief of the suffering of others.

I think Adyashanti could finagle a fine personal retreat and never speak or work again in his life if he so chose.  He’s got to have more connections than a PC motherboard.  Yet he chooses to speak to no-account madmen like myself.  Why on earth would he bother?  I suggest it is because he knows there is just One.  There is no need to short-cut One and no way to short-cut One.  There is no center, no diameter, no circumference.  There is no beginning and no end.  Adyashanti is doing what he does because even though he “knows better”, he constantly chooses to know nothing and thus he allowsdoing to happen of its own accord. Thus he and we are made happier, more peaceful, and moreconsciously Whole because of it, paradox or not.

Thank you for your patience with this article.

On Surrender The Nondual Diary: A New Beginning (Day 1)