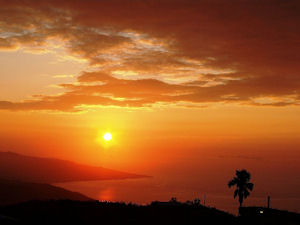 I’m a whole day early with the new post, and the new Awakening Clarity.  That in itself is a fine Sign.

This new approach to Awakening Clarity is chiefly in reaction to this website.  I sat down several days ago and did Byron Katie’s The Work on it, on how I saw the blog itself, and how I saw myself in its mirror.  I wanted to deconstruct and strip away any beliefs or opinions that might be arising from it.  I have to confess that I found quite a few cropping up.

Ego is not a yesterday thing for me, and I’m not sure that it ever is for anyone.  I think response time is the largest change I’ve seen in myself.  It’s a continuous challenge to remain willing to surrender to truth rather than enhance, enlarge, or decorate it all to hell and back.  But I spot the sticky thoughts much quicker now.  Once again, I’ll turn to the blog itself to illustrate my point.

The day I started Awakening Clarity, which was about a month ago, I had no idea that I was sitting down at the computer to start a blog.  I’m an online bookseller, and I probably thought I was sitting down to do some business; I actually don’t remember.  But I do know that I didn’t have any thought of a blog in mind.  One thing led to another; I can’t even recall the sequence.  I sat down one night to do something else and stood up about six hours later with a new blog.

Now, the funny thing is how quickly I developed beliefs about this new venture.  I wanted it to be attractive and smart.  On one level that’s simply what humans do: the best we can with what we have.  It’s a natural, evolutionary drive toward efficiency.  That’s true enough, but it’s not entirely true.  On another level I’m putting this thing out into the world as a representative of my precious Fredness, of my egoic self, and regardless of how attractive and smart I might or might not be, I want you, the reader, probably a total stranger who will forever remain a total stranger, to nonetheless think highly of me!

We have dipped into the ridiculous.

That’s not a wonderful thing to dig up and then admit about myself, but this is why I do The Work.  I really do want to know, as soon as possible, whenever I’m slipping into delusion, which is pretty damn regularly.  If I am willing to know the worst about myself, I can probably continue to consistently see the Best.  In line with that, if I come here and tell on myself, that stimulates further diminishment of ego, which gives it less of a payoff to behave in such a way.

To continue the whipping: Right after noticing that I wanted quite a special blog, the next thing I discovered was that I had quietly and unconsciously decided that a lot of people should read it!  Why?  Because my ego wants that kind of approval and attention, that’s why.  There’s no other valid reason.  I went with the servant-to-God thing first, because that allows me to present such grand, if false, intentions, and sets me to receive yet more accolade for such admirable humility.  That it would be undeserved accolade doesn’t ruffle my ego one bit.  It’ll take what it can get.

Anyway, I tried on, “I just want to be effective for God,” but it just didn’t hold water, not for long.

I noticed that in my meek role as God’s humble servant I immediately became concerned with the Almighty’s Yahoo and Google rankings. Within a week I was looking at a better, more beautiful web host that I had absolutely no idea how to make work.  The precious Blogger STAT page lay perpetually open under one of my Foxfire tabs.  How many people had checked out God’s Very Own Blog yesterday?  From where?  How many are reading it RIGHT NOW?  And most importantly of all, WHAT DO THEY THINK OF THE GUY DOING IT?  The guy who’s doing it for God, I mean, of course.

Let’s be candid.  Let’s at least try to tell the truth here.  If Being can do a whole damn universe, don’t you think It could probably do a decent spiritual blog?  And if it was going to do one, wouldn’t it maybe pick Richard Gere or Annette Bening  or maybe OPRAH or Eckhart Tolle to write it, so that somebody would actually give a damn about it?  This is a little backwater beat that may serve to humble me if I steer it right, but it won’t even do that if I allow it to inflate me.  And I’m very, very good at allowing stuff to inflate me.  In the absence of fact, even my imagination will suffice.

To cut myself just a little slack, maybe there’s a bit of something okay here.  I’m not sticking up a convenience store; I’m not selling heroin to children.  Perhaps there is some altruistic motivation, who knows?  But let’s not get carried away.  It’s mostly about ego.  It just is.  I hate it, but it just is.  And that’s why the new Awakening Clarity is going to focus on ferreting out stupid egoic movements and obvious apparent faults of character.  I’m setting up to take this ego down.

I started to put a comma after down, and type in “friends”.  See how badly ego wants a following?  Even an anonymous following?  For God’s sake…

Well, I’m glad to have you along for the ride, if you’re there, even if there’s just one of you.  Thanks.

Pick a World and Live In It, Part VI, Conclusion The Nondual Diary: Mountains and Valleys