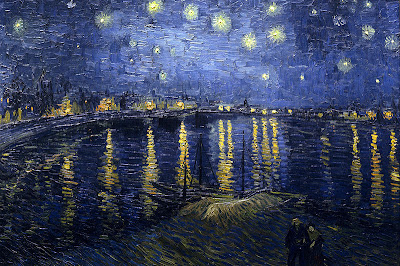 IT IS CHRISTMAS EVE.  It’s late, and absolutely silent, but for the sound of the heater.  Betsy is asleep.  Henry, Dickens, and Gus are all asleep. I am up, but I am not listening for Santa Claus.  I am just listening, without object or objective.  I think I’ll write a quick post.

I REMEMBER THIS EVE ABOVE ALL OTHERS IN MY CHILDHOOD.  On the twenty-fourth of December, the world was full of so much promise.  It was a season rich with stories.  My family was Christian and my mother was quite devout, so the story of Jesus was as much a part of the holiday as the story of Santa Claus.  I loved both stories and believed both–hook, line, and sinker, as we say.  Even at four or five years-old, having been spoon fed every single bit of information my young mind possessed, I nonetheless assumed I had the real information.  I already knew I was right.

I CAN REMEMBER GOING OUT ON THE FRONT PORCH, with the bite of winter pressing against my little face, and looking up at the night sky.  I would note the brightest star that caught my eye, and for me, just that fast, that star would become the Christmas Star; meaning the star of Bethlehem.  I could see in my mind; see the three wise men trekking across the desert on their camels following that start to a manger, and finding the Mary, Joseph, angels and shepherds all gathered round the Divine Child in perfect adoration–and great timing.  We had that scene displayed in a diorama of porcelain figurines, a wooden stable, and a great big star plugged in and shining down from the wall.  Who could doubt such a thing as that?  Not I.  And now I was now staring at the sky and varnishing the story by adding my own objective facts, so to speak.  I already had my answers; now it was just a matter of swinging the facts around to match them.  It’s easy; nothing to it.

BY THE AGE OF FIVE, prior to ever stepping foot in a school, I already knew that God was on my side.  I knew he was on America’s side.  I knew we were right, because God had helped us win every war.  The Civil War was a bit confusing, because the Southerners had lost, and I was a Southerner even before I was an American.  But I was an American, so I just painted over the facts so that my team ultimately, somehow, won that one, too.  And of course the Korean thing, still fresh and raw when I was a boy in the fifties, was a sticky point as well, but I glossed right over it with the same winning logic.  After all, America didn’t lose, and we could’ve won if we’d really wanted to.  That was basically a win, was it not?  Sure it was.  God was right.  America was God’s team, and we were right and good.  I was on that team, so, by default, I was right and good.  It was absolutely critical that I live in a state of sureness.  I would’ve been terrified in an ambivalent world.  This is what stories give us: sureness.

NOT BEING ONE TO TURN MY BACK ON THE SECULAR, I used the Star of Bethlehem as a handy wish-upon star, too.  I wanted to have the perfect Christmas.  We never got a white one in South Carolina, but that never stopped me from putting in my annual order.  I painted the Santa story the same way I painted the Jesus story.  I painted it the way I wanted to see it, and by golly, it turns out that’s just what I saw.  First of all, Santa was a rich and generous American.  Clearly.  He was Caucasian, spoke English, was happily married, laughed a lot, and liked Coca-Cola.  I figured him to be a Christian as well, which was great, or otherwise poor Santa would burn in hell, like all the rest of the Unbelievers.  You can’t really be a Believer, unless you also have an Unbeliever: yin yang.  Thank goodness Santa was safe, because by extension, that somehow made me safe.  Safety was as important as sureness; they were virtually synonymous.

MY FAMILY DIVIDED CHRISTMAS UP INTO TWO HALVES: on Christmas Eve we opened all the presents under the big Christmas tree, and make a big celebration out of it.  Then, on Christmas morning, we’d run down to find what Santa had brought, and make a big celebration out of that, too.  Leave it to Southerners to draw a thing out and fill it with food.  We were a big family, six kids ranging from me, the baby, up to my oldest sister, who would’ve been fifteen or so years older than me.  There were a lot of gifts on Christmas Eve; the place was stuffed with them!  I would watch as the tree bottom filled up in the days leading to Christmas.  It was a glorious thing to behold.  After singing some Christmas carols, and having my father read the story of the Christ Child, we would then open the gifts.

AS EXCITING AS IT ALL WAS, ultimately it was also a big disappointment, kind of like a rush-and-crash from too much sugar.  It turned out–every year, if you can believe it–that most of the gifts weren’t mine.  The ones that were mine were generally not as exciting unwrapped as they were wrapped.  I won’t say there was no exception, but generally there were two packs of socks and a knit hat for every toy.  And the toys, as a rule, were not the ones I saw advertised on Saturday morning, when there were cartoon on TV.  It was not the cool stuff.  I didn’t know my family was on hard times, and I really didn’t care.  I just wanted more toys, and better toys.  I rarely got them.  Well, thankfully, for every Christmas Eve there was always a tomorrow.  It’s really pretty funny how a child’s mind works. On the day before Christmas Eve, when life was less than fulfilling, there was Christmas Eve coming, which was sure to fill the odd void in my young life.  When Christmas Eve inevitably disappointed, there was always Christmas Day to left to satisfy me.  I was always in a future movement,and I was always hunting for more.  I could barely get to sleep as I listened alertly in the dark for sleigh bells.

CHRISTMAS MORNING WAS THE HEIGHT OF EXCITEMENT.  I would run downstairs and see a full stocking and presents underneath!  It was great, it really was.  Unpacking the stocking was just the best!  At least it was until the stocking was empty and I invariably saw an orange, maybe an apple, and yes, some nice little things as well.  There would be candies, and one year there was even a watch!  Oh!  That was grand.  Yet once I got my Timex strapped onto my arm, and it became a known-and-owned thing, I was back to looking, looking, looking.  Surely there was more in there for good old Fred, was there not?  Ah!  The presents!  And they were nice; they were.  But they were nicest before they were unwrapped.  Before you count me out entirely, please remember that a five year-old, spoiled American boy in the 1950’s is not looking to get a sweater.  I am being a little too harsh. I admit.  Certainly there were toys; we were on hard times, but we were not absolutely broke.  That would come later, in the years after Santa had been exposed and my expectations had wound down dramatically.  I remember the year as a teenager that my best friend got a sports car and I got an army surplus jacket.  Hoorah.  At any rate, all I could see as a youngster was that the toys I got were neither as nice or as plentiful as to the toys my neighbors got.  They got the heavily advertised, cartoon character-approved stuff.  I was strictly second tier.  This was not just an optical illusion; this was a pair of loving parents making the best of a bad situation.  I get it now, completely.  I didn’t get it then.

I CAN’T REMEMBER HOW I MENTALLY JUSTIFIED the disparity in Santa’s drops in those years when I learned to measure, compare, and judge.  I’m sure I had a story about it, probably a linked series of them.  I had a story for anything and everything.  By the age of five I had learned that there was the world of my experience, and the world in my head.  I abandoned the world of my body in favor of the world in my brain.  I would side with it for almost another fifty years.  My whole life fell short of the mental ideals I lived in.  No good thing was big enough, grand enough, or lasted long enough.  Bad things were bigger than anyone else’s, uglier, and lasted roughly forever.  My only respite was knowing full well that at least, thank goodness, given the failure of the day, which never went as it was supposed to go, there was always tomorrow.  In the future everything would come together; everything would be just right

TONIGHT I’M HAPPY WITH THINGS JUST AS THEY ARE.  I’m happy to know that I’m not right. Ever.  I delight in an ambivalent world.  I’m pleased to have found out that Fred was no more real than Santa Claus.  I’m glad to not be betting on the come, or waiting for you and God to come into alignment with my thinking.  I don’t have to take my thinking seriously.  Or yours.  I am tickled to death with socks or a sweater, or nothing.  It doesn’t matter; none of it.  There is deep gratitude for just being here, just sitting here, simply listening to this silent night, not waiting for anything more.  When everything is already here, there is nothing to be missed.

Housekeeping Notes: Posts will now be written and published spontaneously.  I expect it’ll be regular until it’s not. I remind you that there are technical difficulties between MS Word and Blogger, which I’m no longer going to fight to overcome.  Sometimes the post-by-emails will go out; sometimes they will not.  It’ll pay to check the site for updates.  I am going to reinstate the new and possibly improved “Follow by Email” as an available option. Take a chance, if you dare!  As ever, I thank you for your precious attention.  Happy holidays.  Namaste, Fred