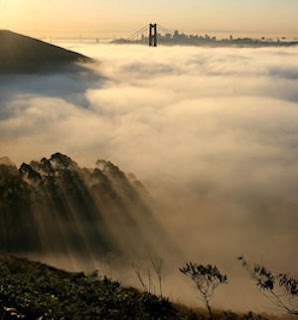 Let me welcome Egypt and France to the list of countries visiting Awakening Clarity.  They join 17 other countries helping to awaken Clarity.
I’VE CHOSEN FOG AS THE THEME OF THIS POST, because truth is always shrouded in fog until it’s not.  I’ve just been on the phone to my old friend, Vince, who’s suffering a little bit today.  Actually, that’s not true.  I’ve just been on the phone with Myself, but I refer to that aspect of Myself, to that short-lived, but interesting event, purely for the sake of convention, as Vince.  We know there is just One, but Fredness experiences diversity, and this morning, part of the experience of that diversity has been Vince.

For the sake of greater clarity between the always confusing relative and absolute views here, let’s split it down the middle, as I often do, and call it Vinceness.  I have just been on the phone with Vinceness.

To our mutual astonishment, Vinceness consciously woke up in my living room one day last autumn.  I confess that I was encouraging it to happen with every bit of skillfulness I then possessed, but I was shocked when there appeared to be a causal happening as a result of that encouragement.  Vinceness has been caught ever since in a phenomenon called Second Movement, which I’ve been writing about for the last two days, but something else comes up before that piece gets finished.  Such is the way of spiritual diaries, I guess.

The suffering that Vinceness is experiencing this morning is the exact same cause as all the other suffering on the planet, so it seems like it’s worth addressing, don’t you think?  Vinceness had a recent meeting where he expressed how he felt, why he felt that way, and what he thought should happen.  That is a belief, an opinion, and a position all rolled into one.  That’s usually the way it happens.  Let’s call it a BOP.  The meeting did not go especially well.  Vinceness is now suffering, because Vinceness has been BOPped!

The day my friend woke up in my living room we laughed so loud that we scared the cats to death!  Vinceness looked at me and cried.  There was such a relief for IT to see the emptiness of it all, the joke of Itself.  Everything was STORY.  There actually was no “Vince”.  Certainly there was a body-mind sitting in a chair in my house.  But the body-mind wasn’t the SUBJECT in a room full of objects, including one named Fred.  Vinceness saw clearly that there was a body-mind in a room full of objects,of which the-one-called-Vince was just another object.  The Subject of the seeing, That which was actually having the seeing, That which was actually Being the seeing, was none other than the One of spiritual fame.

This is what present-moment-enlightenment is: clear seeing devoid of ego.

The suffering Vinceness is experiencing today is because he’s not “picking a world and sticking to it”.  I refer new readers to a damn near endless, six-part series that I wrote in August, which goes into all of this is too-great detail, called “Pick a World and Live In It”.  By this morning Vinceness had figured out that he was a victim of Vinceness.  That’s HUGE progress.  Rather than blaming the other parties in the meeting, Vinceness was willing to accept responsibility.  I applaud that.

The problem began when Vinceness ceased to simply witness a problem, but also offered a solution.Make-believe-Vinceness stepped in to fix make-believe-Vinceness.  Sweet, is it not?  He became willing to accept the consequences of sticking to his BOPs.  He was willing to give up on others accepting his BOPs.  What he was failing to see was that his suffering was not because of their refusal, or their differing BOPs, but because he was standing in the middle of the whole damn thing taking ownershipof the entire situation, including the new “solution”!

When Vince called this morning I let him talk for a few minutes and then I asked him, “That’s all fine dream-talk, but how are you doing?  I mean in terms of reality, of the stuff we usually talk about?”  He said he thought he was doing pretty well, mentioned a book he’d read, and then went right back to the dream-talk.  Again and again I brought him back to truth.

Let me state this as plainly as I can.  I’m going to mix absolute and relative views.  I can’t not.  Sift it out.

I can’t fix Fredness.  Fredness isn’t even a problem.  A so-called problem only arises if and when I THINK I’M FRED!  I can’t fix a dream.  Neither can you.  Guess what?  IT’S A DREAM!  The only way to “fix” a dream is to wake up from it!!  (And STAY awake!) Once I’m awake, I can see that the dream is not a problem, it’s just dreamness.  The fascinating paradox, however, is that when dream behavior that is not working, that is not efficient, is seen from the awakened view, and the dream-character is willing to be other than as it is, then that inefficient behavior will begin to change.  It just will.

I don’t understand it.  I don’t have to.  It works, and that’s how it works, and that’s enough.  Why is always a set-up for suffering, so let’s not ask.  The weirdness of it all is probably why a long line of mystics who were smarter and more dedicated than this one finally threw up their hands at all of this and said, “You know, it’s a Mystery.”