The Nondual Diary: Mountains and Valleys

The Nondual Diary: Mountains and Valleys 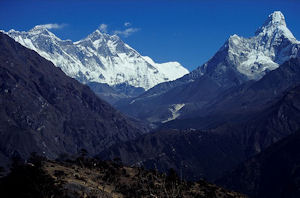 Once or twice a year I get to surrender to pain in my abdomen.  It’s quite a treat.  I think it’s something akin to a ghost that’s left over from my heavy drinking days.  It used to haunt me more often and more viciously, but over the years it’s been a less and less frequent visitor.  When it shows up, however, it’s still a mean visit.

I haven’t had a drink in over 11 years, but that kind of karma can linger for a very long time.  Last night it woke me up at 1:00 a.m. with a less-than-gentle reminder of what it used to be like for me on a regular basis.  I took a variety of medications, but I couldn’t kick it.  So I ended up staying up all night working on Awakening Clarity.  I went to bed just prior to my wife, Betsy, leaving for work.  I was so grateful to have a warm, soft bed, fresh, wife-brewed tea, and a concerned kiss.  I can remember when I didn’t have it so good, pain or no pain.  I slept blissfully until The Right Annoying Sir Henry Hackett, our eight-pound feline fire alarm, decided it was time for me to get up and feed him.

When illness strikes it’s never fun, whether it hits us or someone we care about.  There is typically immediate resistance by the mind at what’s happening to whichever body we’re currently concerned about.  There’s the sudden, sure notion that this “shouldn’t be”.  Still, if it’s already happening, then it is only reasonable for us to recognize that it is. The mind loves to try and change the past.  It believes that if it resists long enough and hard enough the story will change to suit its whims.  Try it yourself and see if it works.  When I tried it, and I did indeed try it for 54 years, it never once worked.

To layer “shouldn’t be” on top of something that’s already taking place is the recipe for personal suffering.  Shouldn’t be is always a personal, positional judgment.  It’s never the truth.  How do we know?  The pain already is.  I defy you to find anything beyond an opinion that anything that is should not actually be.  There is no evidence whatsoever to support any notion of “what isn’t”.  Followers of “what isn’t” are insane and they suffer for their trouble.  Contrary to that position, there is there is a huge body of evidence to support What Is.  We call it Reality.

I can’t recall suffering for even a moment last night.  Maybe I did, but if I did, then it was so fleeting that it happened, as Ramesh would say, “vertically”.  In other words, there may have been a flash of resistance, but it was seen through so quickly that it never had a chance to play out “horizontally”, within time.

I’ve had a lot of help in the last few years at seeing through the idea of personal pain.  I experience recurrent sciatica.  Pain from sciatica is not much worse than a fresh stab wound.  But it’s not much better either.  I had a world class case of shingles in the bad old days and that hurt more than sciatica, but having shingles as badly as I did was about like being in childbirth for two or three months.  My mind won’t even let me get close to recalling that much pain.  But I do remember a lot of screaming.

The mind loves to say, “I can’t take any more.”  This is only true if it doesn’t have to take any more.  If more is there to be taken, the mind will take it.  It may not like it, but it will take it.  Here’s how I know.  Some years back I was in early recovery from alcoholism.  I had managed to put a few years of gentile poverty between me and a drink.  That was hard, very hard.  That kind of life challenge is enough to make or break most people.  I figured it was enough for me, too.  I was wrong.

The day after I picked up a medallion marking four years of sobriety I got arrested for some of that long-arm karma I was talking about.  I had just about gotten back on my feet from alcoholism; not quite, but close.  Along came a legal case that kept me in high heat for years.  Some scars from it will last until this body is vacated.  I got to spend six months’ worth of weekends in jail.  With sciatica, without pain medication.  Out on the county roads, picking up trash.

I remember being so grateful because I got to leave jail every Monday.  I’d call Betsy every Monday as happy and excited as I could be.  I understood what Byron Katie understands: the best thing about the past it that it’s over. Why would I want to bitch and moan about something that was finished?  It was Monday, and Mondays were GREAT days!  I could eat good food and take some pain meds!  Oh boy!

Recovery from alcoholism, poverty, sciatica and jail all taught me that the mind could take whatever was put on it until it couldn’t.  It taught me to surrender.  In 2006, while all of this was going on, I just gave up.  I didn’t want to play that story any more.  It was too awful, too ugly, too much.   And that’s exactly the moment I woke up from The Dream.  Seen in hindsight, the very worst things that ever happened to me turned out to be the very best.  I haven’t been married to a position since.