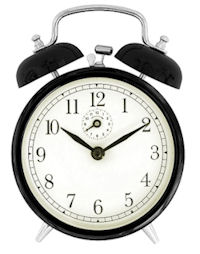 I noticed this morning that I was beginning to believe that my internal descriptions about life (otherwise known as ungrounded opinions) were actually representations of life.  I noticed because my dearest friend, suffering, came to visit.  This may sound unpleasant, and it is at first, but whenever suffering drops by, it’s also the opportunity to discover the truth–if I’m willing to trade in comfort to do so.  I’m usually willing.  I was today.

Suffering was there in my bedroom the instant I opened my eyes.  My alarm clock, which I’d suspected to be broken, but had been unwilling to replace because I’d held the opinion that it shouldn’t be broken, proved itself to undeniably be broken.  I had held an opinion: shouldn’t.  Reality had held a fact: is.  Guess who’s going to win that argument?

The digital bell was showing up on the display, meaning that I, by God, had done my part.  I’d properly set the thing, yet no alarm signal had ever sounded.  I held the traitorous machine in my hand and eyed it with loathing.  It was a total maverick.  It had, in fact, gone rogue.  Although I had continued to subscribe to the freshly defunct myth that “My alarm clock should ring at the time I set it,” the alarm clock itself had opted out of that story.  The clock wasn’t supposed to ring and so it didn’t.  I chose to interpret this impersonal event as, God dropped the ball.  I had done my part, but the universe hadn’t done its proper job, so something wrong happened.

The facts are simpler than that.  I did do my part.  The universe did its part, too.  In reality, the alarm wasn’t supposed to ring and so it didn’t.  Everything is just fine. What I chose to do with those raw facts was my completely my business.  I could leave them the hell alone, go buy another clock, and notice that I was supposed to get up at 9:30 instead of 7:00, or I could make up a contrary storyline and suffer.  God didn’t care which way I wanted to go.  I chose to be insane until my dear friend, suffering, forced me into line with sanity.

I noticed that I was holding onto an opinion: “I got up later than I was supposed to.”  I noticed that reality was holding a fact: “Fred got up at 9:30.”  There’s no suffering in that fact.  There’s no problem with that fact.  Truly, it is what it is.  So, in the face of the truth that hanging onto my storyline would require suffering, I dropped my comfort, which was, “I am right in my storyline and when the world contradicts that storyline, IT is wrong.”

The world is never wrong.  The world is what it is.  I can hold opinions that run counter to that.  But I have to suffer if I do.

I dropped the idea that I should have gotten up at 7:00 a.m.  I didn’t. What value was there in hanging onto the lie that I should have?  I noticed that thought made me feel stressful.  I noticed it reintroduced me to my friend, suffering.  I realized I had been insane.  I had thought I was supposed to get up 7:00 a.m. , but that wasn’t true.  I was supposed to get up at 9:30.  Great!  I had gotten up right on time!

By the way, lest you think that surrender equates with a lack of action, let me tell you that my alarm clock gets to not-ring if it wants to not-ring, but it’ll have to live in the freedom of not-ringing within the confines of the green plastic dumpster at the side of my house. The idea of “7:00 a.m.” is a collective myth; I know that.  The notion that “alarm clocks should ring when they’re set” is another collective myth; I know that, too.  Neither one is true unless they are.  But I’m absolutely going to buy a new alarm clock today and tomorrow morning I’ll find out if it is supposed to ring at 7:00 a.m. or not.  Either way, there’s no problem at all.